Congratulations on your new arrival!

As a new pet parent, you have a responsibility to help that puppy settle in with as little stress as possible. Indeed, the old adage “Start as you mean to go on,” is very true when it comes to your first 24 hours with a new pup…with added cuddles of course. 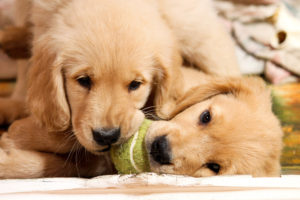 Spot the schoolboy error in the following scenario:

The puppy slept like an angel in the car all the way back from the breeder. He arrives at his new fur-ever home, and the adorable bundle is carefully carried into the puppy-proofed room where his crate, toys, and water are. He’s put on the floor and takes an instant liking to a toy teddy and starts to play…

Scratching your head to spot the mistake?

OK, let’s take things a step further. The puppy plays shake with the teddy, running round the room with him. Then puppy stops, squats, and relieves himself on a rug.

These pet parents’ error was not to take the puppy straight to his toilet spot immediately they got home. This gives pup the opportunity to empty his bladder before things get exciting. Puppies often urinate shortly after waking, so by putting him in the right place means you give his house training a head start. Oh yes, and if he does go, give him lots of praise so the penny drops about where he’s supposed to toilet.

Leaving his mother and everything that’s familiar is a big deal for a puppy, so don’t overwhelm him. Now it’s best to restrict him to one or two rooms – he can explore the rest of the house at a later date.

Bring him in from the toilet spot and show him the crate (laced with treats of course) and water bowl. If you have children, make them sit calmly on the floor with a treat in their hand, and let the puppy go to them. Keep an eye on the time and after five to ten minutes, distract the kids (yes, the kids not the puppy!) with a new DVD or toy so the puppy gets some peace to explore.

Your puppy’s world has been turned on its head and everything is strange and alien to him. Give him a helping paw to adjust by quickly settling him into a routine. Decide on his meal and bedtimes, and stick to them even on this first day.

This includes popping him outside to the toilet spot within a few minutes of eating (as food in the stomach stimulates a toileting reflex). Also, take him out every 30 minutes when he’s awake and when he first wakes from a nap.

Never chastise or punish a dog, but especially a young puppy on his first day in a new home. However, this doesn’t mean he can do what he wants. Remember, that if you allow him to take liberties now, it’s harder to stop those bad habits further down the line.

Hopefully you decided on the house rules (Is the puppy allowed upstairs? Can he jump on the furniture?) before he arrived. If you have a no furniture rule and he jumps up, then gently distract him with a treat and when his jumps down, give a cue word such as “Floor” and lots of praise.

Make sure everyone in the house is on board and plays by the same rules, to avoid confusing the young four-legger.

Opinions vary about where the puppy should sleep on their first night, but bear in mind what you do on the first night sets a precedent. If you can steel yourself to put the pup in his comfy crate and then leave him to go to bed, then he’ll adjust more quickly in the long run.

Make things low key for an hour before bedtime, so no energetic games and turn down the lights, so he gets the idea it’s sleepy time soon. Take him out for a final tinkle, and then pop him into the crate with a cuddly toy and a business-like, “Quite time, now.” Then go to bed.

Young pups can only hold their bladder for one hour for each month of their age. But at night when asleep you can add an hour or two to this. Thus, an eight-week old pup should be given a toilet break around 3 – 4 hours later.

Keep that toilet stop low key, so he gets the message it’s sleeptime not playtime. If possible, avoid putting a light on. Take him outside but with the minimum of chat, and ignore his attempts to engage you in a game. When he does his business praise him, then return him to bed.

If the puppy cries during the night and you’re worried about him, avoid entering the room whilst he’s actively crying. This rewards the noise and makes him more likely to learn to bark as an attention getting strategy. Instead, wait for a gap in the whining to slip in and check on him.

When he wakes on the morning of his second day in the house…you guessed it…straight out to the toilet. Then he has breakfast…and yep, out to toilet again. There’s a lot of toing and froing when you have a puppy so get used to it!

…and your puppy will settle in just fine.