German Shepherd Dogs are a popular pet for so many reasons. They can be very trustworthy, loving, and amazing dogs! Many German Shepherd lovers are very loyal to the breed, and have either owned them in the past, or have always wanted to. However, most owners don’t take the decision lightly. This breed can certainly be a challenge! Sometimes, through no fault of the owner, the dog’s behaviour can break down and become a big problem for the family. So, if you’re looking for training for German Shepherds that really works, Royvon is here to help.

German Shepherd Dogs are a popular pet for so many reasons. They can be very trustworthy, loving, and amazing dogs! Many German Shepherd lovers are very loyal to the breed, and have either owned them in the past, or have always wanted to. However, most owners don’t take the decision lightly. This breed can certainly be a challenge! Sometimes, through no fault of the owner, the dog’s behaviour can break down and become a big problem for the family. So, if you’re looking for training for German Shepherds that really works, Royvon is here to help. 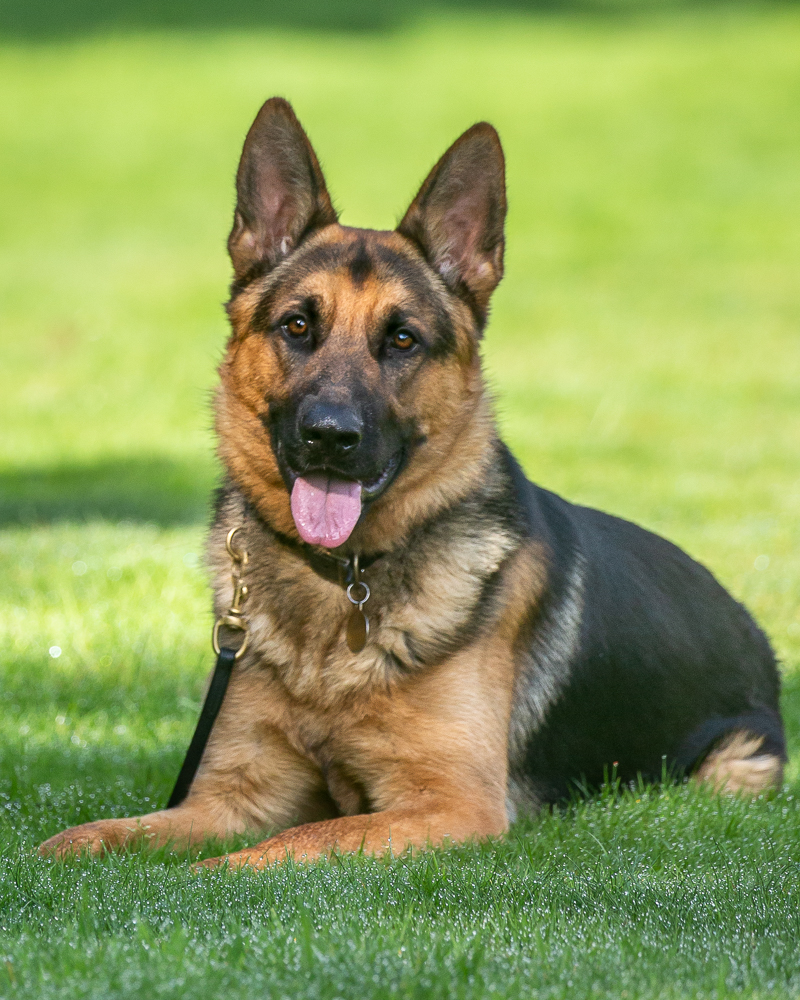 We know that every dog owner wants the best for their pup! However, with German Shepherds, a few problems can arise, that need addressing to make sure your relationship with your dog is harmonious! It’s easy for bad habits such as incorrect socialising, rewarding the wrong behaviours, and aggressive behaviour to form early on.

German Shepherds are a special breed that needs particular attention and care when it comes to training! But there is so much conflicting information out there, it’s hard for well-meaning owners to know what to do. This can lead to demotivation and giving up on training. Many owners think that attending one puppy class a week is enough for a well-behaved pup. With German Shepherds, this simply isn’t the case! They need consistent, effective training, especially in the first 100 days they spend with you, to grow up into happy, healthy dogs.

German Shepherds have a loyal following of people who simply love them! However, many others perceive them as aggressive or scary, so they don’t have the best reputation. This is especially hard if an owner doesn’t look like they’re in control of their pup! It can lead to comments and stares from strangers and members of the family, who may perceive the dog as a threat, or just don’t understand why you love them so much when they’ve caused so many problems.

We know that this can feel embarrassing, especially when you know your dog isn’t really a monster! For owners, it can be upsetting. You know that this isn’t your dog’s true personality. At home they’re so loving but outside, they can look like a monster. You may be wondering what you’ve done wrong. But don’t worry, with some effort and consistent training, they can become the loving family dog you’ve always wanted, inside and outside of the home. How Do We Help With Training For German Shepherds?

We absolutely LOVE German Shepherds, and many of us own them ourselves. For example, our MD Darren owns a very well-behaved dog called Rupert, who came to Royvon with severe reactivity issues. With some intensive love and training, he’s now a pillar of the doggie community here at Royvon, and even gets involved with helping our guest trainees, so they can become reformed characters like him!

Over our 60 plus years in business, we’ve come across many German Shepherds. So, we understand that they are loving family dogs at heart, but in some circumstances they can become difficult to manage. This can lead to upset and embarrassment for owners. But it doesn’t have to be this way! Royvon are proud to be considered one of the leading German Shepherd Training specialists in the UK, having trained thousands of this special breed. We were even the leading breeder in the UK for over 20 years, but have now stopped our breeding to focus on behaviour and training.

As a result, we are huge advocates for breeding with temperament in mind, as well as responsible breeding and ownership. We understand the excitement of bringing home a new German Shepherd puppy, but also know and recognise how things can go wrong. That’s why we’re here to help with our Residential Training for German Shepherds. Meet Some Of The German Shepherds We have Worked With Back in the 1980s, Royvon pioneered the residential dog training idea, when it was still considered a strange option! Since then, we have expanded our locations and trainers so we can offer more families like yours training. We want to show you that surprisingly small changes can make a really big difference to your dog’s behaviour!

But why are German Shepherds so suited to residential training? Those with problem behaviour often need a complete change in environment. It’s part of their nature to enjoy following directions, understanding what’s expected of them, and receiving a reward in return! So, changing their environment helps them to stop and think about their behaviour, and what their human wants. This is because when the human gets what they want, the German Shepherd gets what they want in abundance in the form of rewards!

Phase 1 is Residential Training for German Shepherds. To start, we will discuss your dog, their problems, your goals, and assess their suitability for our programme. Every single German Shepherd programme starts and ends in a unique place, depending on your needs- after all, every dog is different! In the first few days with your dog, we will help them settle in and form a strong bond with them. Our training is all about teaching them to focus on the human, by doing that they receive all sorts of nice rewards and feel safe. So, a strong bond is crucial!

Our residential training programmes are 3 weeks long. In week one, we take small steps in an environment with few distractions, teaching them that focus is everything. Then, in week 2, the environment gets a bit more challenging, but we teach them that good focus will bring the rewards they want! In week 3, we can take giant steps with your dog as they’re now very comfortable in our environment! German Shepherds are special because they just want to learn and receive positive feedback from the human training them. This is why our method has worked so well for so many decades, especially with this breed!

The second phase is owner training. We’ll offer a set period of time where you can take advantage of unlimited training sessions, both face-to-face and online. Many German Shepherd owners become amateur dog trainers and move to competitions with their dog. If you want to develop your skills and perhaps even get to competition level then you can purchase ongoing owner training in the months after the programme has finished. What Are The Benefits Of Residential Training For German Shepherds?

Many German Shepherd owners contact us but aren’t ready to make a decision, months pass then inevitably the problem becomes worse. This can become a problem as when they get back in touch, many more months of learned behaviour are present. When this is the case the dog is starting in a much different place than where it could have started after the first contact. That is why we urge you, don’t delay, do your research on us and make the commitment to a new future sooner rather than later if you’re worried about your dog’s behavior!

Living with a German Shepherd month on month, year on year where their behaviour deteriorates is extremely difficult. We’ve spoken to so many owners where this has been the case. In the very worst case scenario, an unruly German Shepherd may have to be put to sleep after harming another animal or human. We’re here to help you avoid a catastrophe like this and help you make the most of this wonderful breed!

We want to help you become a proud dog owner, and one of the thousands of satisfied German Shepherd owners that we’ve worked with. Are you living a life with a badly behaved dog that’s limiting your life? Perhaps you can only take them on walks at unsociable hours when nobody else is about? Or maybe family and friends limit their visits because they are wary of your dog? Our Residential Training for German Shepherds aims to help you on your journey to becoming a proud and responsible dog owner, where other dog owners comment how well behaved your dog is and commend you on how lucky you are!